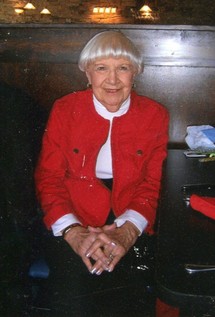 Ann was born, raised, and spent her whole life in Harrisburg. She proudly raised two children, Dr. Barry Sherman and David Sherman. Ann worked to help support her family, first as a stenographer for the Federal Government and later helping run the family business, Sherman’s Family Store. Ann was always an active volunteer until her passing at 97. Ann was on the Board and President of the Sisterhood at her beloved Kesher Israel Synagogue. She was the President of the Senior Adult Club at the JCC, leading programs and dancing classes at the JCC and the Jewish Home. The recipient of a number of awards, notably the Francis and David Cohen Volunteer of the Year, Distinguished Service Award from the National Council of Jewish Women, Meritorious Service to the Elderly from Dauphin County, Helen Goldberg Volunteer of the Year from the Jewish Home, and Woman of the Year from the Jewish War Veterans. She will long be remembered for her service to her synagogue, the JCC, the Jewish Home, and the ecumenical Harrisburg community.

A Gift from her son, David Sherman