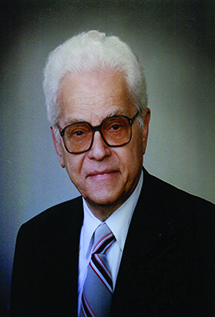 Dr. Koplovitz was a native of Harrisburg and practiced in Harrisburg as a board certified family physician from 1953 until the time of his death in 1984. A1941 graduate of the Kirksville College of Osteopathic Medicine, he was president of the Pennsylvania Osteopathic Medical Association 1970-1971, a Fellow and life member of the American College of Family Physicians and the colleges’ 1975 General Practitioner of the Year. He was president of the American College of Osteopathic Physicians 1976-1977. He had been President of the Pennsylvania Osteopathic Family Physician’s Society and chairman of the Pennsylvania State Board of Osteopathic Medicine. Dr. Koplovitz played violin in the Harrisburg Symphony when it formed in 1931. He enjoyed the symphony, opera, baseball and travel. Dr. Koplovitz was devoted to his wife, Dorothy, his brothers, his patients and his friends.

A gift from The Dorothy B. and S. Lawrence Koplovitz Foundation