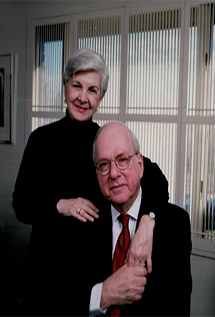 Bill and Marilynn Kanenson moved to Harrisburg in 1961 when Bill started a private medical practice. Marilynn was a financial advisor with Morgan Stanley and spent her lifetime as a community volunteer devoted to many causes including: Tri-County Mental Health, Pa. Association of the Blind, Planned Parenthood, Common Roads and the Dauphin County Library System. Both Bill and Marilynn were active with the Harrisburg Symphony as well as the Jewish Community serving on the boards of United Jewish Appeal, Temple Ohev Sholom as well as the Jewish Home and Group Home. They had great senses of humor and lived life to the fullest traveling the world, enjoying all aspects of the arts and spending time with family. Both had a deep sense of caring, placing the needs of others before their own, with their tireless devotion to their community, friends and family.

A gift from their loving children and grand-daughter: Marcy Kanenson, Ross Kanenson and Riley Kanenson.